GeoVin: public participation in the fight against Chagas disease 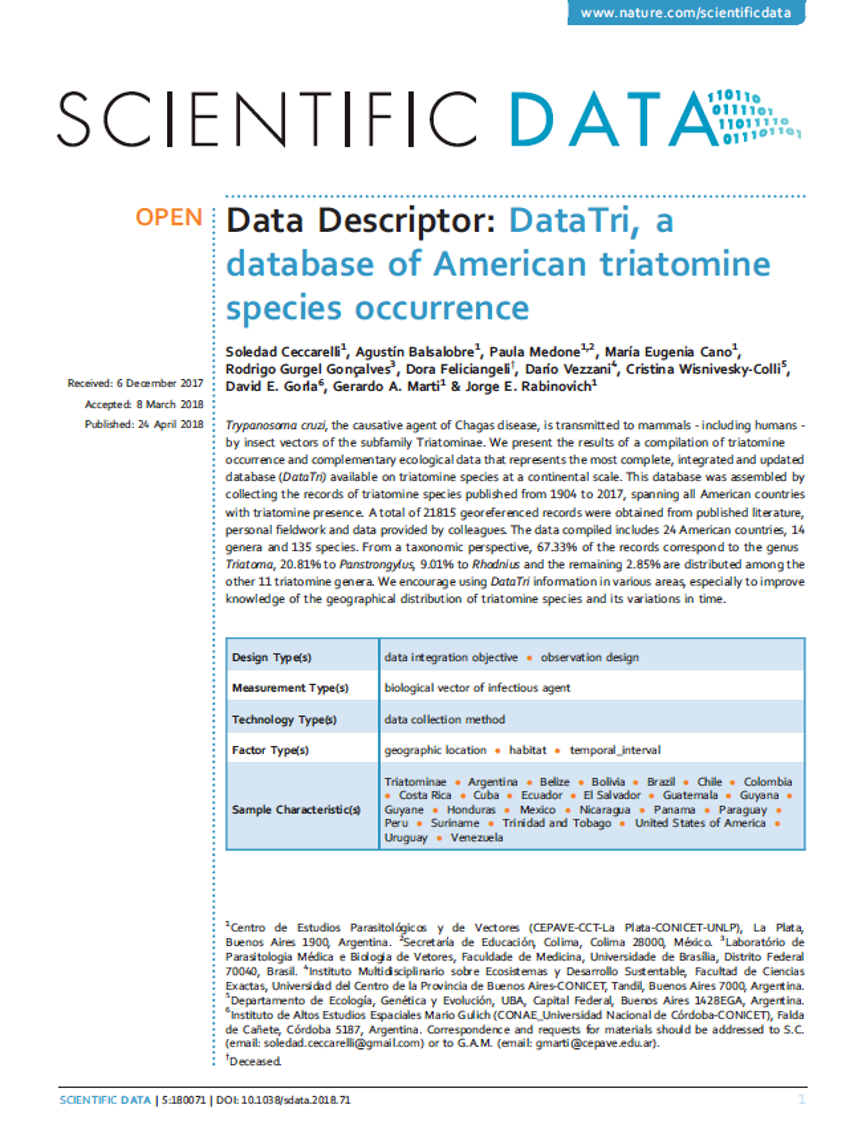 Resumen:
The commonly called “kissing bugs” (triatomines) are insects involved in the vectorial transmission of the parasite (Trypanosoma cruzi) that causes Chagas disease. Chagas is an important public health issue in the Americas and, in the last two decades, came to be also an important issue in European and Western Pacific regions because of the non-vectorial routes of parasite transmission (mother to child and transfusional transmission). The control and monitoring of kissing bugs is one of the current policy for all health-related actions, primarily conducted by governmental agencies, which depend on updated distribution maps for the insects and on their correct identification in the field by technicians.
The aim of GeoVin project is to gather information about the distribution of kissing bugs in Argentina through citizen participation, and to develop tools that field technicians can use to quickly identify the vector. For this purpose, the community is engaged through a mobile app or through the project’s website, which citizen scientists can send photos of the insects they find and a panel of specialized reviewers from the Centro de Parásitos y Vectores from the University of La Plata (CEPAVE-UNLP), that notify the user directly with the correct determination of the kissing bug, and instruct the citizen on the actions to perform based on the health risk it poses. All data is georeferenced and openly shown in the project’s website in real time, and distribution maps of the vector are supplemented with the research center’s up-to-date database of over ten thousand distribution reports from the last 20 years. The GeoVin app was launched in May 2018 and has over 690 registered users, including agents from two governmental vector monitoring agencies from the areas of Argentina most affected with Chagas disease, and has been endorsed by the World Health Organization in Latin America. With all the information gathered through this approach, we used an innovative machine-learning approach (Fastai+Pytorch) to train a Convolutional Neural Network (CNN) to recognize true kissing bugs directly from photos taken with cellphone cameras. The CNN results were validated using over 560 photos sent by citizen scientists, and was able to achieve correct identification rates of 93.75%, identifying true kissing bugs from other insects even with blurred images, poor lighting or with the presence of other subjects and objects in the photo. These results show great promise in the development of a practical and accurate system to recognize the vector in the field without major technological limitations, also highlighting the potential in the contribution of citizen scientists when developing tools to tackle major health threats.